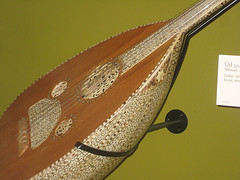 I had a lovely time Friday at the Musical Instrument Museum (“the MIM”) in Phoenix. I had a free evening, and stumbled on a piano concert that was being given at the MIM. I’m not sure what I was expecting from a musical instrument museum, but it certainly wasn’t what I found. The MIM was founded by the former CEO of Target, Robert J. Ulrich. It opened in April 2010. The building and grounds, as far as I can tell, are totally accessible to those with mobility impairments. There’s plenty of accessible parking, broad flat accessible walkways, and easy to use automatic doors. No steps, no ramps. The restrooms are spacious and accessible, and the doors, while not automatic, are not heavy and swing open easily. All the mirrors are low enough to see, which is a refreshing universal design feature. This is an organization that has the email address of its ADA compliance officer on the contact page—need we say more? So I’m going to skip right over accessibility and spare you bathroom and ramp photos. The MIM’s motto is “The most extraordinary museum you’ll ever hear”. How does a museum integrate sound and music into exhibits? I visited the Smithsonian Institution’s National Museum of the American Indian last year, a beautiful building with thought-provoking exhibits that incorporates a great deal of sound. The sounds are speeches, interviews, discussions and music. They are ambient—as you move from one area to another you are moving in and out of overlapping sound zones. It’s an interesting idea, but for me, it didn’t work well in practice. It was difficult to concentrate on and understand the broadcasts given all the other ambient noises from visitors. Much of time you are hearing two or more competing broadcasts, so none of them are comprehensible. I was exhausted by the time I left, and a lot of that was due to the noise. At the MIM, you are given a wireless headset with your admission. The only controls are for volume; everything else is automatic. Most exhibits incorporate a display with one or more clips showing instruments being played; as you move into range, you hear the audio of whatever’s playing. When you move away, the audio fades out gracefully, and there is a silent zone between exhibits. The whole thing works wonderfully, and allows you to listen or not, as you choose. Many videos are subtitled. Exhibits have placards listing the video segments. Some were created for the museum, but many are ethnological recordings collected decades ago. The exhibits are organized geographically. I started with Africa, and in two and a half brisk hours managed to make it through the Middle East, Asia, and Central and South America. The scope is colossal, and clearly the museum plans to be the most comprehensive collection of musical instruments on the planet. There are gaps; the North Korea exhibit has no instruments and only grainy propaganda footage of small girls playing instruments and singing. Libya is similarly under-represented. But despite not even making it to Europe on this visit, the number of instruments is astounding. According a curator I spoke to, most of the instruments are maintained in playable condition, and indeed the concert featured three of the museum’s pianos: two from the late 18th century, and an 1826 Tischner Grand Fortepiano, one of only three known to exist and believed to have belonged to Czar Nicholas I. I took a lot of photos. You can see all of them here on Flickr.
Slideshow: MIM Building a Museum