Wheelchair Racing and the Fear of Falling

brokenclay.org/journal > Life with a Disability > Exercise/Sports > Wheelchair Racing and the Fear of Falling

Here we are at the beginning of the racing season. The weather has warmed up, and it’s time to hit the road and get some training in. I’ve been hunting for an event or two to do before the Bolder Boulder 10K on Memorial Day. Sadly, a lot of the 5K, 10K and half marathon events in the Boulder area are on dirt; the dirt trails around the Boulder Reservoir and Coot Lake are very popular for running races. The racing wheelchair just doesn’t do well on dirt and gravel; it’s like trying to ride a high performance racing bike on that kind of surface. 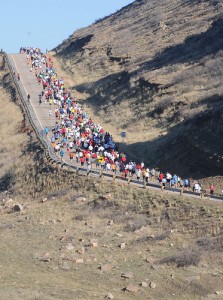 I thought the Horsetooth Half Marathon in Fort Collins in April might fit the bill; I emailed the race director to ask about participating. Now when you email a race director and tell him you’re a wheelchair racer and will there be any issues if you enter his race, you get (or at least I get) one of three responses:

Three or four days later I got response #3, with the added caveat that the course is very hilly, and that they wouldn’t be able to provide transportation from the finish line to the start line.

A couple of days ago I packed the racing wheelchair up in the back of the car and drove to Fort Collins to see for myself. The course starts at the Colorado State University football stadium, on the west edge of town. Rather than parking right away, I drove the first five miles. The first mile and a half is an immense switchback taking you up to the edge of Horsetooth Reservoir. The next bit goes along the dam, but then it starts up again. And up. And up. Pretty soon you see signs advising you that this is open range, and that means cattle guards. 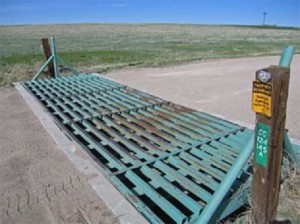 For the uninitiated, a cattle guard is a metal grid set in the road surface that cattle will not cross, because they will get their hooves stuck in them. Or maybe a racing chair wheel?

At about mile 5 I turned around and drove back down. Driving down some of these hills made me nervous in the car! I argued with myself on the way about even trying any of it in the racing chair. But I’d brought the darn thing, and I was dressed to work out, so I parked at a trail head near the start and got going.

Now if a runner is going up a hill and it’s too steep, s/he can jog, walk, or just stop. If I stop on a steep slope in the racing chair, I will either slide downhill or tip over backwards. I pushed, and pushed, and pushed, and pushed. Cars passed me. A couple of bicyclists passed me. I pushed some more. I looked at the cyclometer. It said 0.3 miles. I pushed a little more, looked up at the vast expanse of hill ahead of me, and turned around. Downhill looked just as scary. I rode the brake all the way down, got back in the car, and cried a little bit. When I got home, I emailed the race director to apologize for wasting his time.

Check out The Trail Goes on Forever for Jen Allen’s recap of the Horsetooth Half from a runner’s perspective.