Sometimes You Just Want a Pair of Jeans

brokenclay.org/journal > Personal > Sometimes You Just Want a Pair of Jeans

Stylish, well-fitting jeans are tough for anyone to find. By some estimates, the average women tries on over a dozen pairs before finding one that she’s willing to pay for (and then, if she’s me, she finds it still doesn’t fit very well).

For women who use wheelchairs, the search is even harder. Pockets and rear embellishments are hard on your backside. Because you’re always seated, the front bunches up and the back slides away from your waist, leaving you with a constant fear that your undies are on display for everyone to see. The legs ride up, and even tall girl jeans leave an unattractive gap between hem and shoe. And that’s just the fit. When it takes 10 minutes for you to wriggle into a pair of jeans and you have to be lying down to do it, department store shopping just isn’t going to work.

There are a couple of companies that make jeans especially cut for wheelchair users, like USA Jeans and Rolling Elephants. Rolling Elephants’ line has a certain rugged/organic/crunchy granola appeal, but lacks anything conventionally stylish. USA Jeans seems to have a practical/functional philosophy also somewhat lacking in style.

Enter Indi. Indi does not cater to wheelchair users, but does offer custom made jeans based on measurements you give them. It took quite a while, and some outside help, but I now have a pair of jeans that fits correctly and comfortably around the waist, and (I hope) looks fairly decent.

If the jeans you receive don’t fit, you can return them (you pay postage) and Indi will re-do your order for nothing extra. If I had to do it over again, I would go to a tailor or seamstress and pay her to do the measurements. As it was, I measured myself, and what I thought was my best fitting pair of jeans.

The first pair Indi sent me was, like most jeans for walking people, way too long in the front and way too short in the back. I re-ordered, with rise adjustments. I immediately got an email from Indi asking if I didn’t want to reconsider the waist measurement, as that should change with changes in rise (here an experienced tailor would have been invaluable!). I re-measured my waist, emailed Indi, and waited for the second pair.

The second pair, while better, still wasn’t right. I almost settled for it, but thought If we can get this right, I’ll be able to buy jeans that fit whenever I want!. So I sent it back, requesting an even higher back rise and an even lower front rise. At this point the Indi pattern person got alarmed, and emailed me to confirm. Did I really want a 7″ front and 19″ back? She must have been envisioning a very unusual physique! I measured myself again (tailor, tailor, tailor). I guessed about the waist. I sent her an email.

The third pair was so close I almost cried. The back rise was now high enough, but the waist! Many inches too large. My self-measuring confidence was at an all time low. I took them to a tailor. She laughed and said, “You’ve got some gap-osis going on – you could fit your purse back there!” She pinned. She measured (4 7/8″ taken in!). She sewed. 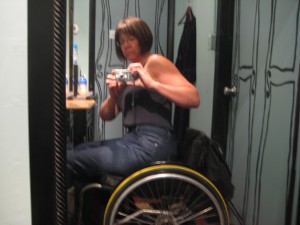 And two days later, voila! Jeans that fit around my butt and my waist. And a set of measurements, courtesy of my tailor, for the next time I order.

Obviously the Indi process isn’t foolproof, but for those who don’t have access to a dressmaker to make them jeans from scratch, it’s worth looking into. It’s pricey, but not as pricey as designer denim. Each repeat of the production process took between 3-4 weeks. But now that I know it’s possible to get jeans that fit, I’m going to have a hard time buying jeans off the rack that don’t.