Cycling the Dordogne 2011: The Things We Saw (Thursday)

brokenclay.org/journal > Travel with a Disability > Trip Reports > Cycling the Dordogne 2011: The Things We Saw (Thursday) 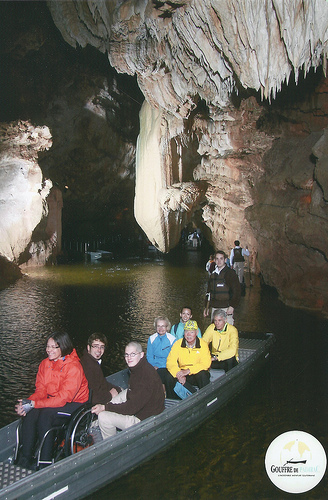 The big event for the Thursday was visiting the giant cave of Padirac. There are very few pictures, I’m afraid, as photography isn’t permitted in the cavern.

The Devil and Saint Martin
The devil formed the Gouffre with the kick of his heel to challenge Saint Martin. If the saint were able to cross the abyss, Lucifer would give him all of the souls of the damned peasants he was about to drive straight to hell.

So Saint Martin, driven by his faith, spurred his mule. With a tremendous leap, the animal reached the other side of the crater, leaving an imprint of his hooves in the rock that is still discernable today.

Defeated and angry, the devil immediately disappeared to the bottom of the Gouffre…

I had studied the website pretty carefully and was fairly convinced that it was not going to be accessible to me, and I was reconciled to that. So I was surprised when Marie announced that we were going to have a special tour. Our first view of the visitors building was not very encouraging, and in fact, there were no physical or architectural accommodations for access whatsoever. What there was were three strong young men.

Marie went inside to pay for our tickets, and promptly came bouncing back out to ask me for proof of disability. I handed her my handicapped parking permit which apparently did the trick. She came back with the three strong young men (hereafter 3SYM), and they escorted us around to the back of the building where there were still steps, but not as many. The 3SYM picked me up, chair and all, and lifted me up to the level where the restrooms (so not accessible!) were, kindly inquiring if I needed to use them before we got going. Then down several steps into the visitor center, and to the first elevator.

This elevator took us down 99 meters into the chasm, and I naively assumed that at this point we were done with elevation changes. Not so! I didn’t keep good track of all the staircases we descended/ascended, but trust me when I say there were a lot of them. Luckily there were very few visitors the morning of our visit. This enabled the 3SYM to carry me up and down narrow, dark, wet, concrete stairs without having to shoo hundreds of other tourists out of the way first. Eventually we arrived at an underground boat jetty, where we bypassed the fairly long line of waiting tourists and got into a boat (yes, wheelchair and all). While reviews of the caverns in English frequently emphasize the lack of English-speading guides, one of the 3SYM spoke excellent English and provided the commentary. The boat ride was 0.5km of serene crystal clear underground river. The lighting is very subdued, the vault of the ceiling far above our heads. At points it was raining; our guide explained that the rain is a constant feature no matter what the weather above ground. At the other end we disembarked and walked (rolled, were carried) through more amazing caverns and to more underground lakes and waterfalls. At the Lac Supérieur the able-bodied visitors climb higher and wind up back at the boat dock; we turned around and retraced our steps.

I asked the 3SYM how often they were called on for wheelchair-carrying duty; they guesstimated a couple of times a month. I asked if the management had any rules and regulations about who they would or would not allow in and carry; they didn’t know. So this access seems to be undocumented and at the discretion of the management (the 3SYM declined to answer questions about the ownership of the caverns; that’s apparently a sensitive subject). I have a hard time imagining that a tourist attraction in the US would do what the 3SYM did.

Oh, the toilets! The 3SYM lifted me up the one step into the ladies room, and then blocked the door; Claudia helped me in and out of the narrow stall (although the toilet paper roll holder was a casualty when I tried to use it as a grab bar).