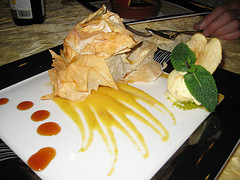 I’ve never been on an organized tour before, but certainly one of the great advantages of this one was the excellence of the restaurants and meals chosen by the tour leaders. Accessibility was not as high a priority for restaurants as it was for hotels, but the meals were really good. I think the philosophy was that accessibility wasn’t worth sacrificing the best food, perhaps a very French attitude.

I’m afraid I wasn’t alert enough to take pictures of food except for our desserts the second night in Rocamadour. For the organized dinners, the tour leaders set the menu, so everyone ate the same thing (except in cases of food allergies or the like).

We had dinner the first night at La Truffe Noir. As I said in the hotel post, the restaurant is accessible via the French doors to the courtyard and has an accessible restroom.

The first evening’s dinner was at the Best Western Beau Site. The restaurant is actually across the street from the hotel and overlooks the valley. Access to the dining room was fine; I didn’t try the restroom.

Entrée: a mousse of scorpion fish (rascasse)
Plat: rabbit leg in mustard sauce, fried potatoes (they had a fancier name than that, but I can’t remember it), a small green salad
Fromage: Rocamadour (the speciality cheese of this region)
Dessert: this is just sad – forgetting desserts?!

The second evening’s dinner was on our own. We went to Le Restaurant au Château L’Hospitalet. Again, the dining room was accessible. The restroom was accessible assuming you can get past the initial doorway, about 25 inches/64 cm.

Entrée: none
Plat: grilled slices of duck breast on tagliatelle with wild mushroom sauce, small green salad
Dessert: the only food I managed to take pictures of!

The first evening’s dinner was at the restaurant of the Hôtel Saint Albert, just down the street from our hotel. The bar area was accessible, but the dining area is about 7-8 steps up, and the toilet is downstairs from the bar. I got out of the chair and bumped up the stairs on my butt, and was glad I’d worn a denim skirt.

The second evening’s dinner was on our own, and we went to a Moroccan restaurant, La Palmeraie. Access to the dining room was fine, and also to the restroom, once we’d cleared out the stuff in the way (coat racks, etc). We could only eat about a third of what we were brought, and even that was so much!

Entrée: a variety of salads, including cold roasted eggplant, a mixed salad that included potato salad, cold spicy cooked carrots, and tomatoes, and a salad of tomatoes and roasted green peppers. We were feeling so vegetable-deprived by this point that we fell on our salads like starving savages and devoured them.
Plat: a gigantic mound of couscous, accompanied by garbanzo beans, stewed vegetables (onions, tomatoes, zucchini), soaked raisins, and a very hot chili sauce. Then each person had their own protein, either chicken or lamb in various forms.
Dessert: one each of a chocolate covered coconut ball, a cookie indistinguishable from a kipferl (which I suspect tells us something about the trade between the Austrian Empire and the Orient), sugared and fried phyllo dough, and a small cornmeal cake that I ought to know the name of, but don’t.

The third evening was our final farewell dinner, and it was at Le Petit Manoir in the medieval city. I’m sorry to say that it was the least accessible of all the restaurants we went to, with the entrance being up several sets of stairs, followed by a spiral staircase (wide, at least) to get to the dining room. On the other hand, I think it was the best dinner we had. The chef (and owner) is Vietnamese, and her dishes had a light and interesting touch. Three guys carried me up all those stairs, but it was a very dicey thing for them, especially the spiral staircase part.