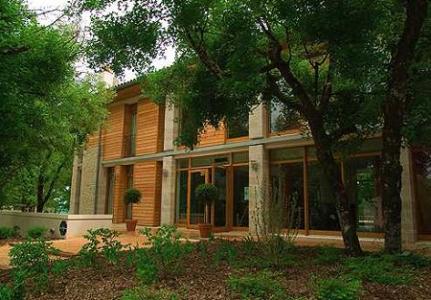 The ExperiencePlus staff did a superb job of ensuring that all our hotels were accessible on our trip to France. There were three hotels:

In the first town, Brive-la-Gaillarde (Brive the Brave!), the group normally stays at La Truffe Noir, very near the center of the medieval city. This hotel is completely inaccessible, except for the restaurant. In order to get into the dining room, you must find a staff member somehow and have one of the French doors looking out onto the courtyard unlocked. They may also have to move some tables and chairs (and possibly diners) so that you can get in. The courtyard is loose gravel. There is no parking. There is an accessible toilet on the same level as the restaurant.

So the group stayed there, but we were scheduled to stay at Hôtel Le Quercy, just a few hundred meters away. The week before the tour began, the ExperiencePlus guides checked the hotel and found that while the promised accessible room renovation on the fourth floor had happened, the elevator had not yet been installed.

Instead they booked us into the All Seasons Brive Ouest. This is a budget chain on the outskirts of Brive in an industrial park/big box store setting. There are two handicapped parking permit spots outside the lobby doors, and we parked there using our US permit with no trouble. Doors are automatic, and the floors are hard surface and easy to roll on. The reception desk is lowered. We found the staff very welcoming and helpful.

Our room was very spacious, with plenty of room for the wheelchair on all sides of the bed. The bed was just barely lower than my chair, making transfers easy. The bathroom is a wetroom: tile floor, raised toilet seat with a small grab bar. A half wall separates the shower area (which, interestingly, is raised, not lowered) from the rest of the room. A plastic chair was provided. It might be a little tricky for a solo wheelchair user to keep her chair from getting wet after transferring to the plastic chair. Shower controls and the shower gel dispenser are well within reach.

The on site restaurant is accessible. It’s very popular with locals and was filled up completely for lunch and dinner both days that we were there. The hotel has just been renovated and still had some growing pains (a little ongoing construction, computer for guests not yet working, etc), but nothing major. The decor is very modern and bright (our tour leaders called it the “green hotel” thanks to the large swaths of bright green walls in the lobby).

In this medieval tourist destination where most of the buildings are squashed up against a cliff face, the group has traditionally stayed at the Best Western Beau Site in the center of town. You guessed it, not accessible. So the whole group moved to Hotel Les Esclargies in L’Hospitalet, just above Rocamadour, and walking distance (by steep stairways or elevator) from the old city. 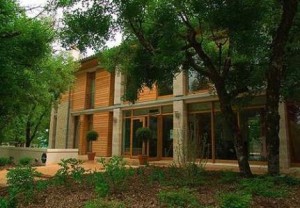 Les Esclargies is a beautiful, new (2005), eco-friendly hotel in a serene natural setting. The style is sort of Zen/spa/modern, with seagrass flooring, soothing neutral colors, lots of natural wood and bamboo, and large windows overlooking the park-like grounds. There is a small parking area, gravel, with stepless access to the hotel front door.

We were given La Castella (the rooms have names, not numbers), another spacious ground floor room. Windows are openable, letting in the sound of bird song in the morning. There is no traffic noise. Every room has a little private garden or balcony; on the ground floor the garden area is shielded from that of other rooms by hedges.

The wetroom is hands down the most thoughtfully designed I have ever seen. Slate floor (rough enough to not be slick when wet, smooth enough to roll over easily), sliding pocket door with a large handle and easy action. One corner is the shower, with a plastic chair, grab bars at multiple heights, and multiple docking locations for the hand held shower. The next corner is the sink, with room for toiletries on both the sink itself and a small shelf under the mirror, easy to reach. The mirror itself is mounted at an angle, so you can see yourself in it. There’s a lovely heated towel rack (the light packer’s friend) which makes it easy to dry clothes. There’s a raised toilet seat, again with a good grab bar, and finally a nice squeegee on a pole so that you can clean up all the water that’s going to wind up on the floor when you take a shower. The sole criticism I have is that the threshold to the wetroom is something of a jump, but otherwise it’s a dream.

There is no on site restaurant, but the breakfast is super, and staff take drink orders. My favorite was little pots of slightly sweetened yogurt and fresh berries (red currants, raspberries) which I dumped over my muesli (brought from home) – the perfect biker’s breakfast. They also had local bread (both with and without raisins and walnuts), Parisian baguettes, butter croissants and pain au chocolat.

We stayed at Les Esclargies for three nights, and it was definitely our favorite.

Finally, a group hotel that was accessible. The Best Western Le Renoir is a city hotel about three blocks from the medieval center of Sarlat. The accessible room we were given (Nr. 12) is on its own half floor, reached via an elevator that is big enough for two people plus wheelchair plus some small luggage. There is no hotel parking, and the entrance is on a fairly steep one way street.

This was the biggest room ever! From the door to the closet to the toilet, then on into the room proper with a king sized bed, around the bed to the giant bathroom is a real trek. The bathroom has a tub with grab bars and a flat surface to transfer onto at one end. There’s a handheld shower head and shower gel dispenser mounted so high that even an able-bodied person would have trouble reaching them. The bathroom has a couple of other logistical problems: a half wall that doesn’t prevent the entire floor from getting wet if you do manage to take a shower; but we requested some shampoo packets and extra towels to soak up that water and they were cheerfully and promptly provided.

The breakfast room is on the ground floor behind reception and is accessible. Staff are alert and offer to get things that are out of reach. The breakfast itself is good in the bread/egg/cheese department, but somewhat disappointingly for late spring relies too much on canned fruits.

Outside in the courtyard there’s an unheated swimming pool with a nice lounge area about four or five steps down from the main level. The directrice pointed to a temporary metal ramp and offered to put it up for me, but since it would have had about a 30° slope and it was too cold to swim, I thanked her and declined.