No, it was all a mistake!

brokenclay.org/journal > Life with a Disability > Exercise/Sports > No, it was all a mistake! 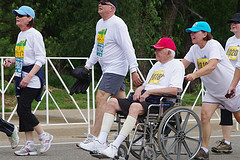 It turns out that the AGREEMENT that I was asked to sign in order to participate in the Bolder Boulder was not for the likes of me, only for participants pushing someone else.

This has become clear after a day-long communications comedy that included the following:

So that was fun, but now (I think) it’s over. Unless someone tries to kick me out of the race.