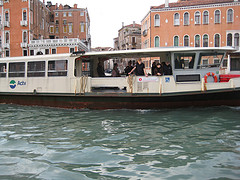 I’m just back from a two week trip to Italy. We visited Rome, Florence and Venice. All the photos (including far too many pictures of bathrooms and far too few pictures of neat stuff) are on Flickr.

Transportation worked out well. We flew United from Denver to Dulles to Rome and back. Aisle chairs arrived on time, the wheelchair remained intact, and there were jetways for all flights. In contrast with Liz’s unfortunate experience on her Budapest flight, I was treated respectfully and professionally at the gate. (In fact, I pretty much had her conversation #1 [the way it should have been] before each flight.)

In Rome, I was asked if I wanted assistance from the gate to the plane, or just at plane-side. Not realizing that there was a bus trip in between, I declined. When we got to the bus, I wasn’t on the list (for the special bus, the one with the wheelchair lift), but they rustled one up pretty quick and didn’t give me a hard time about it.

On most of the flights I had no issues getting assistance from flight attendants to go to the lavatory. On our return flight from Rome to Dulles, we were seated in the central section of a Boeing 767, and the reading lights and call buttons were not functional. This meant (aside from getting eyestrain from trying to read in the dark) that there was no convenient way to contact a flight attendant. They’re supposed to do regular “water walks” up and down the aisles, but that wasn’t happening much.

A couple of hours in, I was just contemplating dropping to the floor and scooting to the bathroom on my butt when the seat belt sign went on due to mild turbulence. An hour later (seat belt sign still on), many people began getting up and using the lavs. Some were sent back to their seats by the flight attendants, but many were not.

I asked my husband to tell the flight attendant that I needed the on board wheelchair to get to the lav. He tried, but she told him to sit down. Twenty minutes later, he tried again. She came to our row and started giving him a lecture about how getting out the OBWC would be sanctioning a passenger getting up while the seatbelt sign was on (this with all sorts of passengers wandering the aisles behind her).

By this time I was pretty desperate (also tired and in pain, so not very diplomatic). I asked her to talk to me, not him, as he had nothing to do with it. She asked if I could wait for 5 minutes (as if the seat belt sign was going to go out in 5 minutes!). I said I’d been waiting for hours since there was no way to contact an FA. I started to cry and told her to go away.

She did, but came back with the OBWC very apologetically and took me to the lav. All in all an unpleasant experience.

We took several train trips, mostly on EuroStar trains but also on a couple of regional trains. We only went between major cities, so I don’t have anything to report on getting assistance at smaller stations (unless Venice-Mestre counts as a smaller station). I was very impressed with the Trenitalia assistance system. Here’s how it works. Every train station in major cities has an office called Sala Blu or Assistenza Disabili. You can email them (list of email addresses), call them (National Helpline), or just go in person.

I tried calling twice with my Italian cellphone, and never succeeded in getting through. For email requests, they want 24 hours notice. For in person requests, assuming you are traveling between major cities, they only want one hour’s notice, so that’s what I did. We turned up at the Assistenza Disabili an hour before we wanted to travel. They assisted in buying the ticket. On the EuroStar, there is wheelchair seating in one of the First Class cars, but you only pay the Second Class fare. You can buy the tickets yourself ahead of time, but then you won’t get the wheelchair seats. If you have the wheelchair seat, you can either sit in your own chair (the seat flips up and there are wheelchair tiedowns, but they don’t make you use them if you don’t want to), or you can transfer to the train seat as long as you can find someplace to stow your chair where it won’t be in the way. Again, I didn’t get any grief about leaving my (non-foldable) chair between me and the next row of seats (which is where your companion(s), if any, will be seated).

I decided to be mellow and not worry about whether someone would be there with the lift at the other end. On several of our trips the conductor actually stopped by to tell me that it would. They were there, at the right car, every single time, even when our seats had been changed literally at the last minute (ie, I was boarded into car A, we saw that it wouldn’t work, I was taken back off, we ran like madmen to car B, and I was boarded again). All the train personnel were friendly, helpful, and never grabbed my chair and pushed it when I didn’t want them to.

On the two regional trains we took, the floor of the wheelchair accessible car was on a level with the platform, so two guys would just sort of help to make sure the casters didn’t fall into the gap. Otherwise they used a lift. The toilet seat is spring loaded, and it can be tricky to get it to stay down while at the same time trying to sit on it. It’s a good idea to have a little supply of toilet paper of your own when traveling; some restrooms didn’t have any.

A vaporetto is a Venetian waterbus. The vaporetti are public transportation, like the subway, as opposed to water taxis and gondolas, which are for tourists. There are single-deck and split level vaporetti; the single-deck boats are wheelchair accessible. The crew help you on and off quickly and efficiently; they are clearly used to getting things with wheels on and off these boats. We saw folks with strollers, wheelchairs, handtrucks piled high with boxes and shopping trolleys on the boat.

The normal single fare is €6,50, but wheelchair users travel for free and one companion pays €1,10. Go together to the ticket window to get the special fare.

We took a few taxis, mostly to and from the airport and/or the train station. Again we were pleasantly surprised. In Paris, I found it very difficult to get a taxi – the drivers complained about the wheelchair, or just drove away when they saw it. In Italy, there was no such problem, and despite the fact that I had read that there was a €1,00 surcharge for taking a wheelchair, we were never charged.

We did not take any buses or subways, so I have no useful information. The buses in Rome and Venice appeared to be kneeling buses with a wheelchair ramp at the middle door, but I never saw one in use.

In both Rome and Florence, our hotels were very centrally located, and we walked everywhere. In the part of Rome we were in (Tourist Central), I’d say the incidence of curb cuts was about 10%, so it was essential to be able to get up and down a curb. In Florence, I’d put the curb cut ratio at about 70%.