brokenclay.org/journal > Life with a Disability > Goofy Stories > Like Schumacher, after the bus 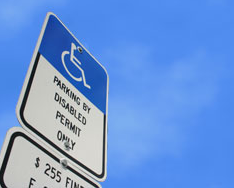 Christiane vs the bus:

It was the White City stop, the same story as yesterday. I’m waiting in full sight at the bus stop, holding my hand out towards the street, clearly signalling to the driver that I want to get on. And just like yesterday, the driver leaves me standing there.

I practically exploded with anger. Sometimes anger is a good thing. I planned to follow the bus so that I could get its number. I careened down the sidewalk like a madwoman, and at some point I passed the bus, which was stuck. The bus had to stop at the next light, and I got up to the closed door and yelled at the driver and asked him why he hadn’t picked me up. Why he couldn’t obey the law of the land. That I would report him to the company. That I would see to it, that he got what was coming to him. I was pissed.

Then I thought, “I’m going to win this.” I kept going, crossed the street ahead of the bus and got to the next bus stop just as the bus did. At a frenzied speed.

And, look! The driver deployed the ramp. Immediately. Without saying anything. I was exhausted after my sprint, but I was in the bus. I had won.