Lo and behold, my town has one! But $50 is a ridiculously small fine. How many people are going to read that, and think, “Wow! It really is no big deal to park in handicapped permit space!”? 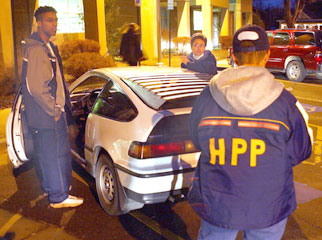 Two people argue with Handicapped Parking Patrol volunteer Kay Laate on Friday as she writes a ticket behind the Longmont Public Library. Times-Call/Lewis Geyer
From the Daily Times Call, reprinted here in its entirety because the TC doesn’t archive.

LONGMONT – Kay Laate gripped her steering wheel as her eyes keenly surveyed the inside of a grey-green Acura Legend parked in a handicapped parking space.

She parked her voluminous van in a nearby spot in the Walgreens parking lot at Ninth Avenue and Coffman Street and grabbed a booklet of unwritten parking tickets. Her sister, Joanne Ashton, 69, hopped out of the passenger side of the van, disposable camera in hand, and approached the Acura while Laate followed with a flashlight.

The routine was the same; Laate flashed the light’s beams inside the windows of the car as Ashton searched for the handicap placard. After finding nothing, Ashton prepared to snap photos of the license plate as Laate began writing out the ticket.

“Oh!” shouted Martha Morgan as she approached the Acura with her right arm hooked around her 90-year-old mother, Mary Burger. “I forgot to put my sign on the car. It’s in the car.

Morgan hustled inside the car and provided the two handicapped parking patrollers with her placard. As they prepared to leave, Morgan thanked the women for keeping her on her toes.

“I’m so glad you check,” she said, then pointed to a nearby red Porsche. “Because it hacks me off if I’m trying to get (my mother) in and there’s some dodo bird like that car and you can’t get in.”

The founders of Longmont’s Handicapped Parking Patrol had similar frustrations when they decided to form the program about eight years ago. They, too, were tired of driving to their local supermarket and finding handicapped spots reserved for either themselves or loved ones snagged by physically capable people.

A group of mostly senior volunteers joined forces. They spent hours in training, learning how to write tickets, the police jargon on radios, and how to stay safe on the streets. They wore the required safety vests and hats and strapped stickers and flashing lights on their cars.

Volunteers learned federal and state codes and discovered challenges. Law requires that for every 24 regular parking spaces there must be one, van-accessible handicapped spot. Many businesses stick with minimum requirements; some don’t.

“That’s always been the hardest thing was getting businesses to come up to federal law,” said Deb Lewis-Demille, a six-year parking enforcement officer who will retire on Jan. 28.

In a February 2002 ceremony at the Civic Center, Chief Mike Butler swore several men and women in as officers, allowing them to issue parking tickets. As the group departed from the ceremony, they ticketed their first offender, a man who had parked in a handicapped spot in front of the building.

In 2003, volunteers issued 449 of the $50 tickets to people who illegally parked in handicapped spots. Of those, 96 were not paid. And about one quarter of those ticketed each month appear in court to contest their tickets. That’s pretty impressive, Lewis-Demille said.

The patrol’s success was not immediate, however. It took time for the program to find its footing, said Peggy Sturgis, a former parking enforcement officer.

“It takes a certain type of person to do this,” Lewis-Demille said. “As a volunteer, you do have authority.”

Sturgis said at least one of the first volunteers’ passion for the job became a problem.

“We actually had to let a volunteer go,” Sturgis said. “He had taken his cane and beaten on top of a desk of a business owner (because) he was letting his employees park there when the business was closed to customers.”

These days, aggression comes not from the volunteers but from many of the ticketed offenders. Ashton and Laate have built a thick skin.

They’ve been called “white trash,” “old grandmas” and other choice names. One angry violator hit Laate with a door. Another broke Ashton’s fingernail. The sisters have even been chased on foot by a man running on ice in cowboy boots, angry about his newly acquired ticket.

“I think we’ve been called every name that comes out of the book,” Laate said.

The 14 volunteers take those comments in stride. They patrol for a few hours each week because it’s important to them.

Jim Berthold, 57, says he volunteers because it makes sense to help people and do something worthwhile. His patrol partner, Don Tocko, 76, feels an obligation to make parking lots accessible to handicapped people like his wife.

Ashton and Laate have similar motivations. By day, Ashton works at Girard’s French Bakery, and Laate runs a home daycare. At night, they enjoy patrolling Longmont’s parking lots because they get out and meet people. The two also think it’s important to protect the rights of the physically challenged, particularly because their parents were handicapped.

Some of their greatest support comes from Longmont teens. Both women said teens are the first to admit they are in the wrong when parking in the reserved spaces, and some have helped point out offenders.

“They are the most obliging, considerate group of people you could ever deal with,” Laate said. “They are really a neat group.”

But for every handicapped parking violation there is an excuse. Among the most popular:” “I only went in for a minute;” “I was just picking up my son/daughter;” “I didn’t see the sign;” “the business is closed;” “I was feeling sick.”

The patrol isn’t buying any of those excuses. In fact, parking enforcement officials hope to convince members of the city council to raise the $50 rate.

“I think it should go up a little bit more because there are a lot of people who abuse those placards,” said parking enforcement officer Barb Ratner. “It’s just a matter of time. It will happen.”