brokenclay.org/journal > Travel with a Disability > Glacier Bay: The Ship

We traveled to Alaska to join a 6 day cruise on Glacier Bay aboard the Sea Wolf. Sea Wolf is a 97′ WWII-era ship that carries 12 passengers and 5 crew. The owner, Kimber Owen, has gone to great lengths to make the ship accessible to wheelchair users. As she says, the ship is not ADA compliant, but is “visitable”, which in this case means that a manual wheelchair user can get to most everything on the main and top decks.

To board the ship, a wheelchair user must be carried up three steps. After that, little to no carrying is required. 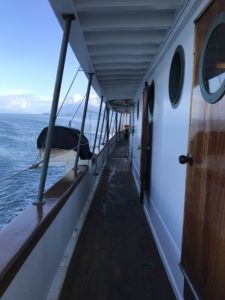 Looking aft along the gangway on the starboard side of the ship. The covered thing hanging off the edge is a grill.

The main deck has a 32″ wide gangway along each side. There is a breezeway at mid-ship that connects the two. In the stern there is a covered dining area with a table that seats 10-14 in varying degrees of closeness, and a carpeted salon with several comfortable sofas and shelves full of maps and books about the Pacific Northwest. The doors leading to the dining deck and the salon are all wide enough for a wheelchair. There is limited space between the table and a sideboard for moving from one side of the dining deck to the other, so I did make a fair number of trips all around the ship to get from one side of the dining room to the other, which was fine: the trip was short and the views were amazing. 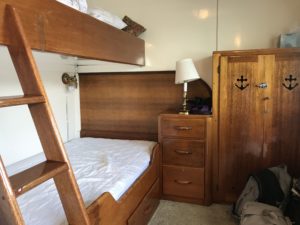 There are two cabins on the main deck, both suitable for wheelchair users. Both have over/under bunk beds, so at least one person has to be able to climb the ladder to the top bunk. There isn’t enough room to turn a chair, but you can get in to the room and over to the bed or over to the toilet/shower area pretty easily. There is a fold down shower chair and a hand held shower head, and given the smallness of the quarters, there is absolutely no problem reaching the water controls, as is so often the case in hotels. I was also offered a larger transfer shower chair in case the existing bench was not quite right. 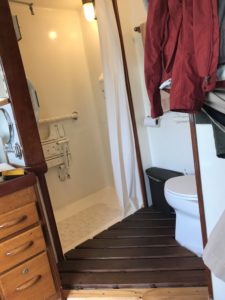 The main deck also includes the galley and some office space for the crew. The bow is open and ramped on both sides. The ramps are quite steep, so it is advisable to have some help going both up and down.

Access to the top deck is via an enclosed platform lift. My 35″ long wheelchair fit comfortably, so I’d estimate the lift length at about 40″. There are three cabins on the top deck, none of which I saw. One is apparently fairly accessible. The top deck is also home to the wheelhouse and has kayak storage aft. The captain welcomed passengers into the wheelhouse, but it is 3 steps up from the top deck. I managed that by scooting up the stairs on my rear end, but a carrying sling was available and the crew would have been happy to carry me up. 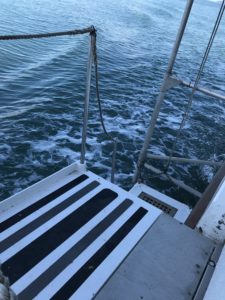 Steps leading down to the water.

On the starboard side of the ship there is a small platform with several steps leading down. This is used when boarding the motor skiff or for getting into kayaks. For kayaking, a floating dock is lowered from the top deck first, and lashed to the steps. Then the kayaks are lowered into the sea, and lashed to the dock platform. As a wheelchair user, I, too, was lowered just like the kayaks. I sat on a hoist sling, chains were attached to the four corners of the sling, and then I went flying. It felt very secure and the crew are very well practiced in the system.

Coming up: a day on Sea Wolf.