Cycling the Dordogne 2011: Logistics, or How It Worked

brokenclay.org/journal > Travel with a Disability > Trip Reports > Cycling the Dordogne 2011: Logistics, or How It Worked 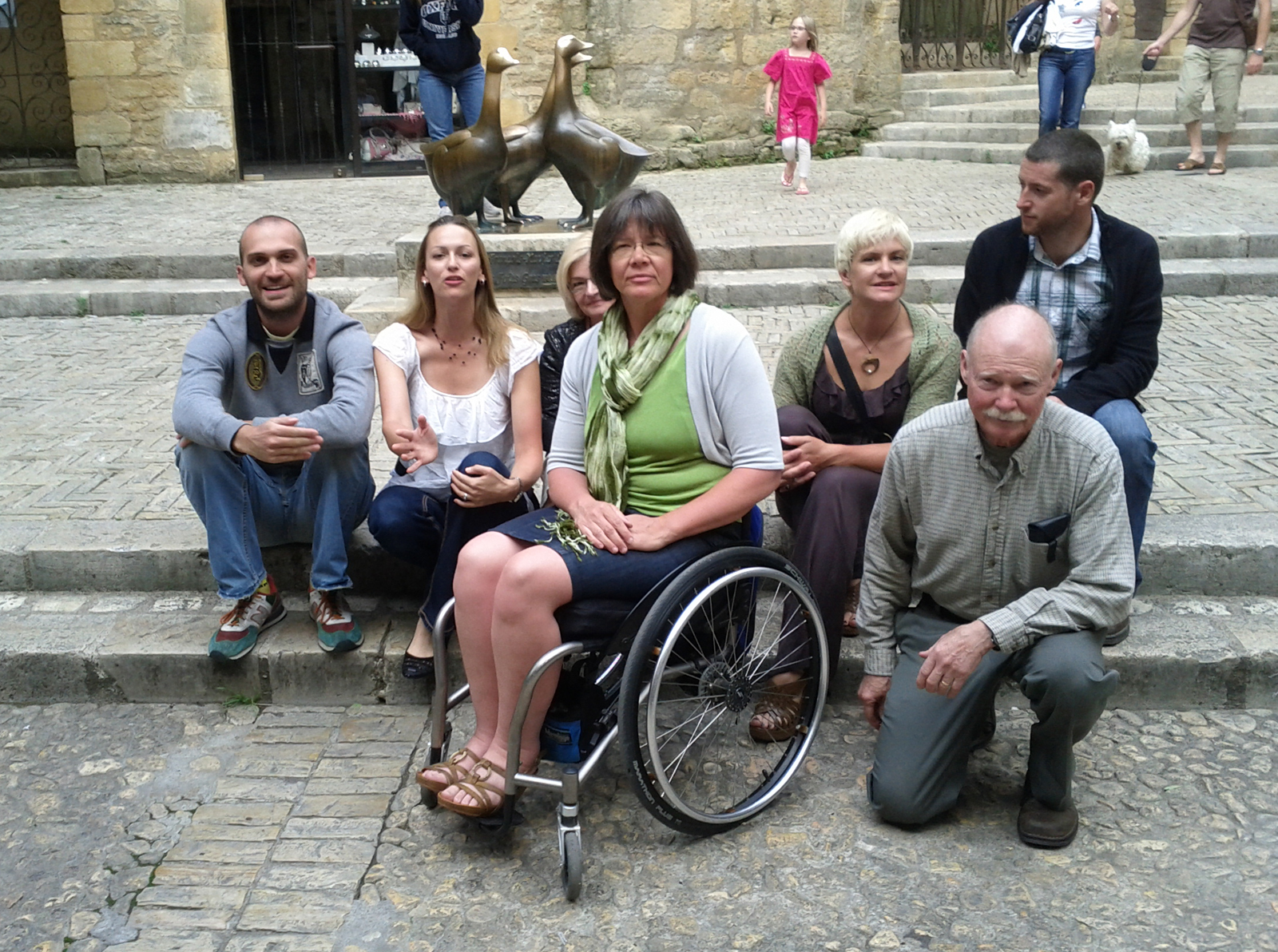 In December, I speculated on how I thought the cycling tour would probably work logistically. Here’s how it played out. First I want to say that ExperiencePlus invested an incredible amount of resources and energy into making this work, and I’m very impressed and grateful. I wouldn’t hesitate to recommend them to anyone, able-bodied or disabled, who wants to participate in a fantastic bike tour.

Bringing the handcycle
We wound up borrowing both the bike box and a wheel bag from our friends. I put pieces of white duct/duck/whatever tape all over them and wrote “Wheelchair” on the tape in three languages. We took advantage of some extra space in the wheel bag to pack my handcycle backpack, water bag and most of my biking clothes in there as well (not the helmet), on the assumption that if the handcycle wheels got lost, I wouldn’t need the biking clothes, either.

The new EU air carrier accessibility regulations require carriers landing in EU countries to allow wheelchair users to take two wheelchairs free of charge. We had absolutely no problem dragging the box and wheel bag up to Lufthansa and saying, “This is a second wheelchair.” There were no excess baggage charges.

Tour support
ExperiencePlus normally requires a minimum of six riders in order to put on a tour. For six riders they provide two tour leaders. In our case the tour went on with five people, and they supplied three tour leaders. Again, I appreciate the significant investment ExperiencePlus put in to this tour.

Every morning there was a time specified for breakfast (dependent on the hotel), a time for “bags down” (checked out of the room with luggage in the lobby if there was a change of hotels that day), and a time for “arrows down” (meaning that the person marking the route had gotten a sufficient head start on the riders). We were also given maps and elevation charts.

The three tour leaders rotated marking, sweeping, and driving the van. The marker rode out ahead of the group and put chalk arrows down on the route so that the riders didn’t have to keep stopping to check their maps. The sweeper rode after the slowest bicyclist (guess who?). The van driver transported the bags to the new hotel on moving day, and sort of patrolled the entire route in case anyone needed water or a snack or mechanical help.

The first day, the tour leaders were a little apprehensive about what my abilities were, about how much help I would need, and about the handcycle itself. When we first turned up with it, they all looked at it and said, “Hmm, that’s smaller than I thought it would be.” Then they tried to put it in the van, at which point it suddenly seemed much larger.

By the second day, everyone was much more comfortable. We’d look at the elevation chart for the day, and the leaders would suggest modifications for me, like driving me the first couple of kilometers if it was mostly uphill, or picking me up before major uphill sections. With three tour leaders, there were always two able-bodied people to get the handcycle on or off the van. In addition, the van would stop at strategic locations just to make sure I didn’t need a lift or anything else. Lunch stops were fairly planned, and the van would meet us with the wheelchair then as well.

Somewhat to my dismay, I wound up riding about half the planned distance overall. Even my longest day was less than the planned route. But I appreciated the tour leaders’ and my husband’s input in planning each of my days, and the flexibility that was possible by having such a small group. And I appreciated my friend Claudia’s mantra: We’re not here to suffer.

And how about that bathroom situation?

I admit that I did dehydrate myself probably more than I should have. At the same time, the tour leaders were super about scouting out accessible restrooms at lunch stops and some of the very touristy destinations. There was one carrying incident; we found a really nice little camping spot with an accessible restroom in the town of Veyrignac. My wheelchair was in the van, it was late afternoon, and the van driver was delivering the luggage to the next hotel (when the faster able-bodied riders get to the hotel, usually several hours before I did, it’s nice if they have their luggage), and we would have probably had to wait a half hour or more for him to come back to where we were.

I eye-balled the distance between the door and the bathroom stall—it wasn’t far and the bathroom looked fairly clean, so I was feeling ok about just scooting in there. Our sweeper, Enrico, wasn’t so sanguine. “I don’t want you on the floor!” he exclaimed. “I’ll carry you!” I figured he’d pick me up bride over the threshold style, but no, he hugged me around the chest and picked me up vertically, feet dangling, clutched to his bosom. “You’re so tall! I can’t see!” Luckily it was a short distance, because I was laughing so hard I couldn’t see, either.

There was some other carrying, too, which I’ll write about in other posts. I was carried into and out of a canoe, up and down steps into a restaurant, and up and down an amazing number of steps in the Gouffre de Padirac, an incredible cave system that will get its own post.

The bottom line
The flexibility, openness and enthusiasm of our tour leaders (Marie, Enrico, and Gwendal) really made this tour work for us. 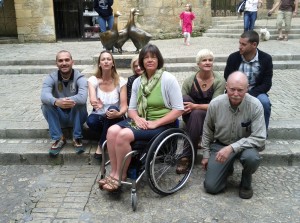