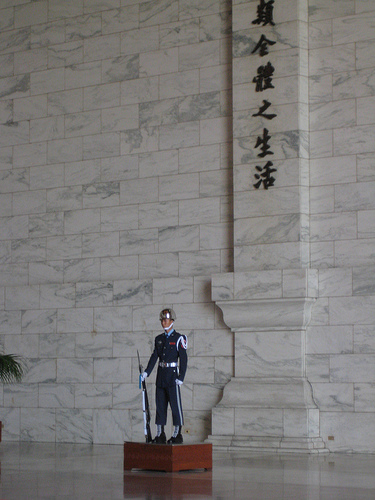 Longshan Temple is the oldest temple in Taipei. I only have a few pictures from the courtyard, as the temple proper is not accessible (click on the photo to see it full size):

Then we took the subway to Chiang Kai-shek Memorial Hall, which is part of a large park complex that includes the National Concert Hall and the National Theater. You know you’re going someplace fancy when the sign in the MRT station is gold on marble: We arrived at 15 minutes before the hour, which meant that we had 15 minutes to get across the park, boggle at the huge staircase and figure out where the accessible entrance is (it’s via either side entrance into the first floor exhibition hall, then take the elevator to the fourth floor). There we saw the elaborate changing of the guard:

These two guards will now stand here under the benevolent bronze gaze of the Generalissimo for 50 minutes without batting an eyelash: More pictures from the hall and gardens (including several wedding photo shoots, and zombies (! – last photo)):

Accessibility: the Memorial Hall itself, and both exhibition floors (1 & 3) are accessible via the aforementioned elevator. The various levels on the first floor are ramped. There are supposedly two accessible restrooms, but I couldn’t find the one I looked for (but I didn’t look too hard). Outside in the park, the paving underfoot ranges from tolerable (secondary brick paths in the gardens) to fairly awful (white paving in the courtyard) to truly ghastly (main garden paths of large, uneven pavers). There are some garden areas with quaint stepped (inaccessible) paths to information signs and views, but on the whole, accessibility is quite good.