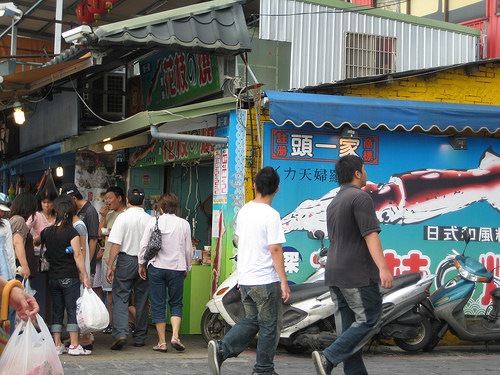 Sunday morning we got up and saw blue sky. With only 40% chance of precipitation predicted, today was going to be the day to be outside, so we planned to go to Yangmingshan National Park. Following the directions in the guidebook, we took the MRT to Jiantan, and found the stop for the #260 bus.

Jiantan is on the eastern edge of the city, and the mountains dominate the view from the metro station: Along Wenlin Road, we saw old houses built into the hillside: I mentioned before that I hadn’t researched this trip very well, and our park excursion fell prey to lack of knowledge. Although we saw several large city buses go by with a wheelchair symbol on them, the #260 bus wasn’t one of them.

Plan B was to take the MRT to the end of the red line at Danshui, an old port town situated at the mouth of the Danshui River. The guidebook warns that Danshui is immensely popular with day trippers, especially on the weekend, and this was definitely true. It was like the Atlantic City and the county fair rolled into one, except that instead of fried crabs, funnel cakes, and fried Mars bars, it was fried squid (on a stick), fried shrimp, fried sweet potatoes and more: We walked up the river front for about 1.5 km until we ran out of contiguous path, and then down the main street back to the MRT.

The place was packed, and on the riverfront, every need was catered for: The riverfront path was marked as a bike trail on the map – we saw several groups of bicyclists in Boulder style spandex, and several shops catering to bicyclists’ needs. We passed a park with several groups of artists created structures out of trash: On the street side, my husband and son stopped into a temple.Waiting for them, I noticed that perhaps one out of every ten groups of people walking by saluted the temple as they passed: The streets and sidewalks were completely packed with people, but all the sidewalks had curb cuts and paving insets designed to guide the visually impaired. The only built in accessibility problem was that the sidewalks were regularly punctuated by grates large enough to drop a caster wheel into, and of course there was the regular issue of parked scooter congestion: