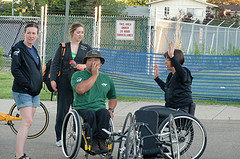 It’s been a busy week in Lake Woebegon…er, I mean, Longmont, my home town. Monday was the Bolder Boulder 10K (race report coming!), and yesterday was the Longmont Triathlon. First the background: my husband and kids have been doing our local triathlon in various combinations for about 15 years. Last year I decided I needed to do something about that, and competed as part of a team consisting of my daughter (swim), son (bike) and me (run, in my every day wheelchair).

That 3 mile push (along with last year’s Bolder Boulder, also done in my every day chair) convinced me that I really needed to get into wheelchair racing properly in order to do the entire triathlon by myself this year.

I’d been handcycling for a couple of years already – not very seriously, but some. I started swimming last September by taking a beginning adult swimming class, and by January felt comfortable enough to start going to Masters Swimming.

With the help of Jacob Heilveil of Boulder’s EXPAND Program for People with Disabilities, I ordered a racing wheelchair in November. It came in December, and the snow melted in March. I’ve been training with EXPAND since late March.

So that’s the setup.

The Longmont Triathlon is a sprint distance event. In this case, it’s a 525 yard pool swim, a 12 mile bike course, and a 3.1 mile run. Either because of my plan to do this triathlon, or just coincidentally at the same time, Jacob decided to target it for the EXPAND athletes as well. This raised the visibility of our participation as wheelchair athletes, and the race director decided to go ahead and add a wheelchair division.

Based on last year’s experience, one of the other wheelchair athletes and I met with the race director a week before the race to talk about the logistics of including wheelchair athletes and especially to deal with some of the problems in the run course. It was mostly on a bike path with a lot of bad pavement and thorns. There was some very tight turns, difficult to do with a 5-6 foot long racing wheelchair. And there were portions over grass and curbs. We walked (rolled, biked) the course, and came up with some alternatives. We also had to alter the way the wheelchair athletes exited to the pool to go the transition area as the existing route included steps and grass.

So my race day experience was a combination of doing my own first triathlon and, along with Jacob and the race director, working out the rest of the kinks of adding wheelchair athletes. We hoped for six to eight wheelchair entrants, but with the event so soon after the Bolder Boulder, we had four. Happily, it was also a family affair – my husband, two children and sister-in-law were also in the race.

It’s a 525 yard pool swim, which means 10 laps plus an extra length. This triathlon (unusually) is organized such that the slowest swimmers start first. One of the other wheelchair competitors persuaded me (and the race director) that it was best for all of us to swim in the first heat, thus getting us out on the bike/run course sooner, with less traffic.

I was very ambivalent about this, and woke up worried that this would mean that I would have to swim in a lane with 4-5 people who were twice as slow as me, and that my swim would really suck as a result. But it turned out great – the race director put the four of us in 2 lanes, which meant that we could split the lane (each swim up and down on one side, at our own pace) rather than having to worry about passing each other. So the swim went really well. I was the second one (of the wheelchair athletes) out.

A 12 mile bike course, composed of three times around a 4 mile loop. My daughter and some of the EXPAND volunteers were ready to get me into my shorts, shoes, sunglasses and helmet and out onto the course. The other guy was slow getting going, so I was the first one out. I discovered at the top of the first hill that my brake was on! I wasn’t overtaken for about 2 miles. The volunteers on the course were all very supportive – lots of cowbells. The other three wheelchair competitors all overtook me at some point on the bike ride (not unexpected).

When I came into the transition area, I was last (among wheelchairs), so everyone was very eager for me to get going and try to catch someone. But I really had to pee at this point! So my daughter got my every day chair, and I got into the port-a-potty (I hate port-a-potties!). The port-a-potty was on a sidewalk, with maybe 28″ between it and the curb. The door was very tightly sprung. Getting out I was trying to push the door open while at the same time not falling over the curb, and I fell over backwards, wheelchair and all. The door slammed shut on my head. Thank goodness I was still wearing my helmet! (Yeah, no picture of me sprawled half in and half out of the port-a-potty.)

Everybody hauled me up and stuffed me into the racing wheelchair.

The run segment was 3 miles, and they felt really, really short. It seemed like no time when I was back at the finish line. It also felt good to get in the racing chair and sort of stretch out everything that was all cramped up from the handcycle. Afterwards I told my coach and the others that maybe I liked racing better than handcycling, which is a big change from my first month racing…

Oh, I came in last (of course), but not by much (3 minutes – shouldn’t have peed!). My time was 2:00:00. After my race I hung around trying to get pictures of everybody else in my family: