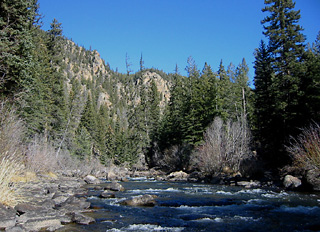 We camped at Rosy Lane, a US Forest Service campground in Taylor Canyon, about halfway between Crested Butte and Gunnison, Colorado. Our pictures are at the very end of this post. Here’s the real story on accessibility, site by site.

This is a beautiful wooded campground between Taylor Canyon Road and the Taylor River. Sites near the road are exposed to traffic, but it is not heavy, and was pretty much nonexistent at night, even at the height of the summer season in late July. Sites near the river get gurgling water and constant rafting parties coming downriver. All sites are well spaced, fairly private, and have some shade. There are two pit toilets, but only one is accessible, the one between sites 5 and 6. There is firewood and water but no showers. There is a narrow paved asphalt trail near site 3 which goes along the river and re-emerges into the campground between sites 5 and 6 (not shown on the map).

Reserveamerica.com, the online reservation website, lists site 4 as accessible, and at the campground, site 8 has the little wheelchair guy. Site 4 is very close to the accessible toilet and is paved (asphalt), with direct access to the river path, but has less shade than some of the other sites. Site 8 is semi-paved (the table is on a concrete path), and has electricity if needed to power medical equipment, so it’ll probably be snapped up by RV campers.

What the online reservation website doesn’t tell you is that many of the other sites are suitable for wheelchair users, with the exception of the river-side sites that feature a steep descent down to the table and fire ring (and possibly the tent pad). Check out the table below for details on each site. Where I say the toilet is far away, but reserveamerica.com says it’s close, it’s because it’s not close to the accessible toilet and/or reserveamerica.com is assuming you’ll cut through the middle, which is too steep and overgrown for wheelchair users to do.

We were in site 1, and I’d be going for either site 3 or 5 the next time we camp there.