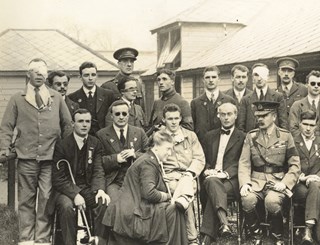 Sir Arthur Pearson was the founder of St Dunstan’s Home, for soldiers blinded during the First World War. In his book, Victory Over Blindness, he has this to say about guide dogs for the blind:

In the early part of 1918 I read an account of arrangements that were being made in France for the special training of dogs to be used as guides for blinded soldiers. Very interesting particulars were afforded of the special training given to these dogs with the object of teaching them to keep exactly in front of the man whom they were taking along, to give him warning of steps, to keep him from hitting against obstacles and to note the approach of motors and other vehicles. As I read the article it seemed to me that it would need a very special brand of dog intelligence if the canine guide were to be brought up to the point that would make him really trustworthy. Besides this, I had a feeling—which I had no doubt the men of St. Dunstan’s fully shared with me—that a dog at the end of a string was apt to remind one a little too much of the blind beggar with his tapping stick and shuffling gait. However, I sent over to France for further particulars, but was not surprised to receive a reply telling me that the idea had not proved as practical as was expected and had been abandoned.

Despite his failure to recognize the potential of guide dogs (in which he was not alone in 1919), Sir Arthur was a pioneer in vocational skills and independent living training for the blind in Great Britain.