brokenclay.org/journal > Life with a Disability > Exercise/Sports > Multiple Sclerosis and Exercise 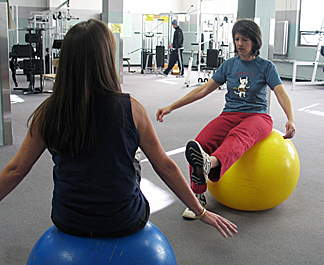 Thanks to Ziggi at Wheelchair Diffusion for the link to the NARCOMS presentation on MS and physical activity.

Less than two out of three responders (57%) recalled their treating physician ever having recommended exercise to them. The main reasons given for an exercise recommendation were general health benefits, weight control, and fatigue management (see Table 1). Interestingly, 8% of the responders who had received an exercise recommendation were unsure of or could not recall the specific reason for it. More importantly, among this group only 38% were engaged in regular physical activity, versus 51% among those who were able to name the specific reason. Also worth noting is, that in several cases the discussion on exercise participation was initiated by the patient rather than the clinician.

Among the main reasons physicians had given to discourage physical activities were energy conservation, overheating, and concerns for imbalance and falling. Most of the comments referred to temporary limitations during an injury or an exacerbation, or to reasonable precautions not to “overdo it”. In some cases, however, the perceived message seems unnecessarily pessimistic, such as “it won’t do any good”.

Other useful references on multiple sclerosis and exercise: