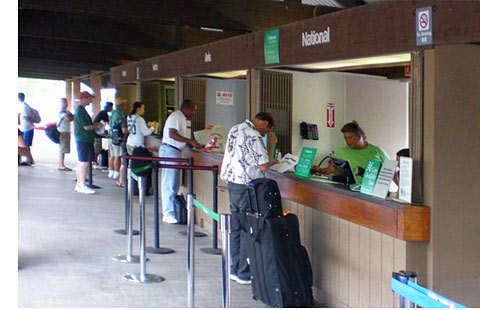 We rented from National, a full-size sedan with hand controls.

I’m guessing they installed the controls specifically for this rental (Hertz keeps a certain number of cars permanently equipped with hand controls). The controls were pretty much fine, except that they tended to run into the steering wheel when accelerating or turning. If it had really bothered me, I would have gone back and had them adjusted.

I didn’t notice until about the third day that “handicapped controls” had been prominently written down the edge the windshield in wax pencil.

The car rental companies are a couple of blocks away from the airport and run their own shuttles (in contrast, for example, to the Albuquerque Sunport where the airport runs the shuttles). National had a single lift equipped shuttle, which they provided fairly quickly. On both runs, the driver was unfamiliar with the lift and took quite a bit of time to work it out. On the return run, the driver had even more problems with the interlocks – he parked in front of a post, stopped the shuttle, ran out of the shuttle and opened the lift doors, came back in the shuttle and tried to figure out how to get the lift to go (turning the power on is frequently helpful), noticed the post, tried to move the shuttle but because the doors were open he couldn’t shift into drive. He decided there was something wrong with the transmission and kept radioing back to his office: “It won’t shift! It won’t shift!”

I let him work it out for himself, although at one point my husband was offering to decapitate the post, Cool Hand Luke style.

Note to companies: it’s great to have good equipment, but if you don’t train the drivers, it’s not much use.