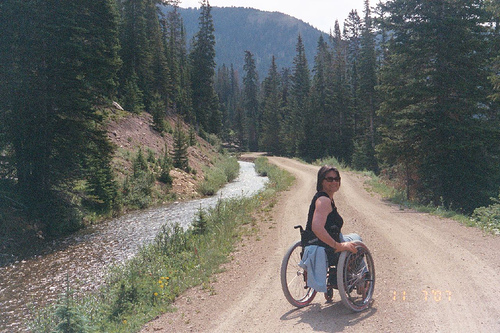 The next day we decided to stay a little closer to home. Bellaire Lake didn’t look too far away on the map, so we set off. In fact, it was up the mountain and down the mountain and up the mountain again, on a hard packed (watered) dirt road. We found Bellaire Lake easily enough, but discovered that the “wheelchair accessible trail around the lake” was really only about 800 feet of sidewalk/boardwalk; where it ended, the trail took off skinnily jumping amongst boulders. We asked the campground hosts about the alleged accessible trail; they just stared at us blankly and she said, “There’s a trail, but you can’t use it with that.”

My beloved opined that I am part of a narrow demographic – wheelchair users who actually would like to go more than 800 feet at a time. I’m not so sure about that, but on our way back to the parking lot we encountered a large family complete with Grandma using a scooter, and they were clearly thrilled about the 800 feet.

On the theory that we were halfway there already, we went to Dowdy Lake as well. I had never been to the Red Feather Lakes area; an interestingly kitschy spot. Dowdy Lake was large and beautiful and wheelchair friendly in the sense that a road is wheelchair friendly. A fishing/motorboating paradise, but not particularly a repeat for me.

Our last adventure was to the Upper Michigan Ditch. This limited access dirt road is a popular winter snowshoe/crosscountry trail. We parked at the Cameron Pass picnic area and crossed 14 on foot to get to it. The first hurdle was the metal gate (like this one, but without any flat spots on the sides). I wound up hiking myself up onto the bar, with my husband holding me for balance, folding the chair back down, shoving the chair under, then getting my legs over the bar and falling back into the chair. It was pretty funny: Then we followed the nice broad unrutted dirt road along the water up, up, up, up – the views of Nokhu Crags and the Never Summer mountains were unbelievable! The pushing was pretty easy, and we were the only people in sight – until the skid loader came lumbering down the trail towards us. We crowded to the edge of the road to let him by, my husband pointing out the mess the caterpillar treads were making of the road. Then came a pickup truck. And another pickup truck. Eventually we got up to where the Forest Service, or maybe the City of Fort Collins (according to the markings on the pickup trucks), was building a bunkhouse, using as many old logs as possible. On the way back down, we watched some of the workers cutting and hauling out a large log on the hillside.

Despite the general air of construction zone, it was a beautiful hike, and I’m hoping to do it again. I don’t know how far we went, but we were out for an hour and a half. The trail eventually leads to Lake Agnes, but I don’t know how long it is. Finally, we stopped for lunch in Gould at the Drifters’ Cookhouse, which replaced the late lamented Howling Coyote. The interior hadn’t been changed at all: flashing Christmas lights, bills of various countries and in various denominations tacked all over the ceiling beams and the bar, tacky signs and animal heads. My beloved headed off to the restroom, while I contemplated the very narrow restroom doors. When he came back, he said, “I don’t think those doors are even 22 inches!” The waitress popped up to tell me there was another restroom; she took me through the dining room to a corridor that was all of 27 inches. Even though I knew better, I tried it, which was why she had to move a bunch of boxes in the corner so that I could back out after getting stuck.

I ordered an elkburger that arrived with the taste and consistency of a hockey puck. After the first bite, I left the rest. Next time I’ll order something safe, like potato chips. From a sealed bag.

On the whole (Drifters’ Cookhouse aside), a very fun and relaxing trip! I’m looking forward to going back and doing more of the Gould Loop and the Michigan Ditch. We also drove through the North Michigan campground and spotted some cabins with ramps up to their porches, so I’m going to check that out as well.

While I was searching for information about the Bellaire Lake boardwalk, I came across this very useful looking site listing a variety of wilderness boardwalks in Colorado as well.